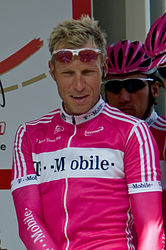 In August 2006, Ludewig was suspended from the T-Mobile Team for some races due to doping discussions, and a letter where Ludewig informed himself regarding substances being used in the sports-world.

He raced in Steinhagen, his last race in 2006, and signed a contract with "Wiesenhof Felt" for 2007.

After being a Pro Rider, Ludewig became head of sales at lightweight.info while taking care of a hobbyteam of freetime-riders. He switched to the Dr. Wolff group in 2015 as a sports marketing manager. His daughter was born in January 2015.