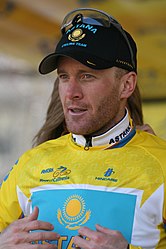 Levi Leipheimer (born October 24, 1973) is an American former professional road racing cyclist. He was twice US national champion, winning the time trial title in 1999 and the road race in 2007, and is an Olympic medalist. Leipheimer was born and raised in Butte, Montana and resides in Santa Rosa, California. He is the patron of the widely attended King Ridge GranFondo, a mass participation ride in Sonoma County.

Leipheimer's major career accomplishments include winning the 2007, 2008 and 2009 editions of the Tour of California, the 2011 Tour de Suisse and the 2011 USA Pro Cycling Challenge. His Grand Tour results include 2nd in the 2008 Vuelta a España, and 4th in the 2009 Giro d'Italia. Leipheimer won the bronze medal in the time trial at the 2008 Summer Olympics in Beijing.

The United States Anti-Doping Agency (USADA) announced in October 2012 that Leipheimer would be suspended for his involvement in doping while riding for Saturn, U.S. Postal Service, Rabobank, Gerolsteiner and Astana. Leipheimer accepted a 6-month ban from September 1, 2012 to March 1, 2013 and was stripped of all race results from June 1, 1999 to July 30, 2006, and July 7 to 29, 2007. Leipheimer committed a previous doping violation in 1996.

In May 2013, Leipheimer confirmed his retirement from professional cycling following the termination of his contract with Omega Pharma-Quickstep.