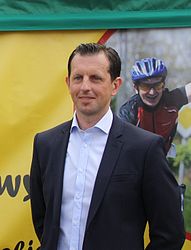 Dariusz Baranowski (born 22 June 1972) is a former professional racing cyclist from Poland. He is known as individual time trialist and a climbing specialist who excels in competing in the King of the Mountains competitions for stage races. He has competed in all three of the Grand Tours. He also won the Tour de Pologne 1991, 1992 and 1993. He also rode at the 1992 Summer Olympics and the 1996 Summer Olympics.