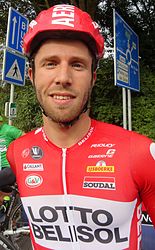 He was named in the startlist for the 2016 Vuelta a España where he won stage 7.