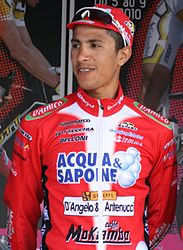 As a junior in 2004, Chtioui finished second in the junior road race world championships. He was beaten by Roman Kreuziger in a two-man sprint after Chtioui established a breakaway on the final descent of the race.

Chtioui represented his country at the 2008 Summer Olympics in the Road Race, ultimately finishing in 87th place.

From 2014 to 2016, Chtioui competed for UCI Continental squad Skydive Dubai–Al Ahli. That year he won a stage and the overall victory at the Jelajah Malaysia, as well as winning the Tunisian national road race championships. In 2015, he won his biggest victories to date by winning the general classification as well as the first and second stages of the La Tropicale Amissa Bongo, a UCI 2.1-ranked race.