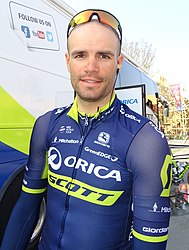 Luka Mezgec (born 27 June 1988) is a Slovenian road bicycle racer, who currently rides for UCI WorldTeam Team BikeExchange–Jayco. After scoring numerous podium finishes in 2013, Mezgec finally tasted victory on the fifth stage of the Tour of Beijing. He was named in the start list for the 2015 Vuelta a España.

In September 2015 it was announced that Mezgec had signed an initial two-year contract with Orica–GreenEDGE to commence in 2016. In August 2020, he was named in the startlist for the 2020 Tour de France.