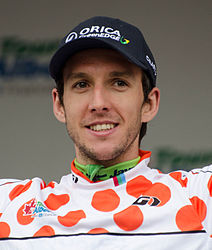 Simon Philip Yates (born 7 August 1992) is a British road and track racing cyclist who currently rides for UCI WorldTeam Team BikeExchange–Jayco. His twin brother is Adam Yates, who is also a professional cyclist. He won the gold medal in the points race at the 2013 Track Cycling World Championships. Following a doping ban in 2016, he won the young rider classification in the 2017 Tour de France and the general classification in the 2018 Vuelta a España. Yates has also won multiple stages at each of cycling's three grand tours.