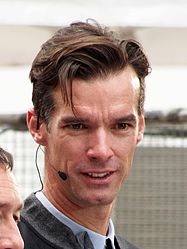 David Millar (born 4 January 1977) is a Scottish retired professional road racing cyclist. He rode for Cofidis from 1997 to 2004 and Garmin-Sharp from 2008 to 2014. He has won four stages of the Tour de France, five of the Vuelta a España and one stage of the Giro d'Italia. He was the British national road champion and the national time trial champion, both in 2007.

Millar was banned for two years in 2004 after he admitted to taking banned performance-enhancing drugs. Upon his return from his ban, Millar became an anti-doping campaigner, a stance which eventually resulted in journalist Alasdair Fotheringham describing him as an 'elder statesman' of cycling.