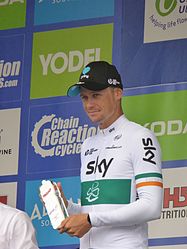 Nicolas Roche (born 3 July 1984 in Conflans-Sainte-Honorine, France) is an Irish former professional road bicycle racer who last rode for UCI WorldTeam Team DSM. He has twice been national champion and has twice finished in the top ten of the Vuelta a España, and won stages in 2013 and 2015. He started a total of 24 Grand Tours, finishing 22, and he took a total of 65 top 10 finishes in Grand Tour stages, including 43 on the Vuelta. He represented Ireland at the 2008 Summer Olympics in the road race. He has competed for Ireland 7 times at the road world championships.