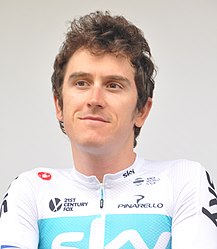 Geraint Howell Thomas, (Welsh pronunciation: [ˈɡɛraint]; born 25 May 1986) is a Welsh professional racing cyclist who currently rides for UCI WorldTeam Ineos Grenadiers, Wales and Great Britain, competing on both track and road. Like older compatriot and teammate on both track and road, Bradley Wiggins, he is one of the few riders in the modern era to achieve significant elite success as both a track and road rider, with notable victories in the velodrome, in one-day racing and in stage racing.

His early successes were in track cycling, in which he was a specialist in the team pursuit. He won three World Championships and was Olympic gold medallist twice, in 2008 and 2012. Thomas had an early win on the road at the 2004 Paris–Roubaix Juniors and later had a senior victory at the 2010 British National Road Race Championships. Leaving track cycling to focus solely on the road, he subsequently found success in both one-day/classic races such as the 2014 Commonwealth Games road race and the 2015 E3 Harelbeke, and in one week stage races, most notably at the 2016 Paris–Nice, the 2017 Tour of the Alps and the 2018 Critérium du Dauphiné.

In cycling's grand tours, Thomas was initially a lead domestique to Chris Froome in his victories. He won the first stage of the 2017 Tour de France, an individual time trial, to become the first Welshman to wear the Tour's yellow jersey. He later crashed in that race, as well as in the 2017 Giro d'Italia, before winning the 2018 Tour de France. He gained the yellow jersey by winning stage 11, extended his lead by winning stage 12, and retained the lead for the remainder of the event. He became the first Welsh, first British-born and third British rider to win the Tour. In 2018 he won the BBC Sports Personality of the Year Award, the fourth cyclist to win the award in that decade. In 2019, he reached the podium again, having finished runner-up in the Tour de France behind Team Ineos teammate Egan Bernal.

Notable for his all-round ability rather than one specialism, Thomas has been competitive in individual time-trials, on the cobbles, in the Spring classics and in the mountains of Grand Tours, where he was the first rider in the history of the Tour de France to win on Alpe D'Huez while in yellow.