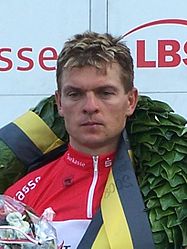 Bert Grabsch (born 19 June 1975) is a German former road bicycle racer, who raced as a professional between 1999 and 2013. He was born in Wittenberg and is the younger brother of fellow road racing cyclist Ralf Grabsch. He is a former UCI time trial world champion, having won the title in Varese, Italy on 25 September 2008.

He competed at the 2008 Beijing Olympic Games in the Individual Road Race, which he did not finish, and Individual Time Trial, where he finished thirteenth. In the same events at the 2012 Summer Olympics, he finished 95th in the road race and 8th in the time trial.

Grabsch retired at the end of the 2013 season, after fifteen years as a professional.