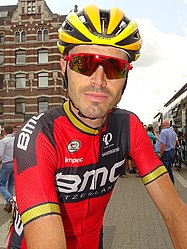 Samuel "Samu" Sánchez González (born 5 February 1978) is a Spanish former professional road bicycle racer, who rode professionally in the sport between 2000 and 2017 for the Euskaltel–Euskadi and BMC Racing Team squads. He was the gold medal winner in the road race at the 2008 Beijing Olympics. In the following years Sánchez proved himself in hilly classics and stage races as one of the most important riders in the peloton. He was also known as one of the best descenders in the peloton. He finished in the top 6 of the Tour de France three times and in the top 10 of the Vuelta a España 6 times. Other notable achievements include winning the Vuelta a Burgos in 2010, the 2012 Tour of the Basque Country and five stages of the Vuelta a España.