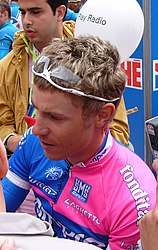 Damiano Cunego (born 19 September 1981) is an Italian former professional road racing cyclist, who rode professionally between 2002 and 2018 for the Saeco Macchine per Caffè, Lampre–Merida and Nippo–Vini Fantini–Europa Ovini teams.

Cunego's biggest wins were the 2004 Giro d'Italia, the 2008 Amstel Gold Race, and the Giro di Lombardia in 2004, 2007 and 2008. He finished second in the UCI Road World Championships in 2008 and in the 2008 UCI ProTour. Primarily a climber, he improved his time-trialing and was characterized by great sprinting ability, unusual for a climber.