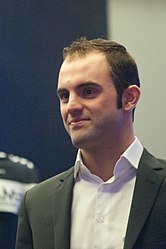 He rode for a year with Team Europcar in 2012, and four years with IAM Cycling between 2013 and 2016. In October 2016 he and IAM teammate Aleksejs Saramotins were announced as members of the Bora–Hansgrohe squad for 2017. Pelucchi joined Androni Giocattoli–Sidermec in 2019 after two years with Bora–Hansgrohe, before joining his sixth professional team in 2020, Bardiani–CSF–Faizanè.