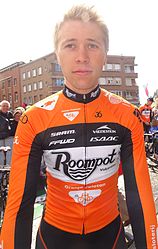 His younger brother Steven Lammertink also competed professionally as a cyclist, until retiring in 2019.