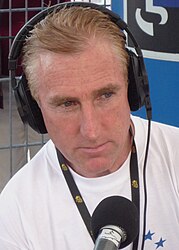 John James 'Sean' Kelly (born 24 May 1956) is an Irish former professional road bicycle racer, one of the most successful road cyclists of the 1980s, and one of the finest classics riders of all time. From turning professional in 1977 until his retirement in 1994, he won nine monument classics, and 193 professional races in total. He won Paris–Nice seven years in a row and the first UCI Road World Cup in 1989. He won one Grand Tour, the 1988 Vuelta a España, won 4 green jerseys in the Tour de France and had multiple wins in the Giro di Lombardia, Milan–San Remo, Paris–Roubaix and Liège–Bastogne–Liège, as well as three runners-up placings in the only 'Monument' he failed to win, the Tour of Flanders. Other victories include the Critérium International, Grand Prix des Nations and shorter stage races including the Tour de Suisse, Tour of the Basque Country and Volta a Catalunya.

Kelly twice won bronze medals (1982, 1989) in the World Road Race Championships and finished 5th in 1987, the year compatriot Stephen Roche won gold. Kelly was first to be ranked No.1 when the FICP rankings were introduced in March 1984, a position he held for a record five years. By total career ranking points, Kelly is the second best cyclist of all time after Eddy Merckx. In the 1984 season, Kelly achieved 33 victories.