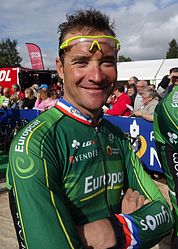 Thomas Voeckler (French pronunciation: ​[tɔ.ma vœ.klɛʁ]; born 22 June 1979) is a French former road racing cyclist, who competed professionally between 2001 and 2017, for the Direct Énergie team and its previous iterations.

One of the most prominent French riders of his generation, Voeckler has been described as a "national hero", due to strong performances over several years in the Tour de France.