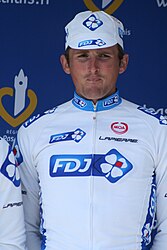 Born in Libourne, Delage participated at the World Track Championships in Moscow in 2003 as a junior, where he won the silver medal at the points race, after Australian Miles Olman. In that same year he would become national junior champion of France at the team pursuit (alongside Jonathan Mouchel, Yannick Marie and Mickaël Mallie) and the madison (together with Mouchel). In 2004 he would win the national title in the points race at the under-23 level.

At the road he made his Giro d'Italia debut in 2006 and finished in 129th position and he won the 1st stage of the Tour de l'Avenir. Later that year he would again become French national champion when he won the team pursuit together with Mathieu Ladagnous, Jonathan Mouchel, Sylvain Blanquefort and Mickaël Preau. In 2007 he made his Tour de France debut.