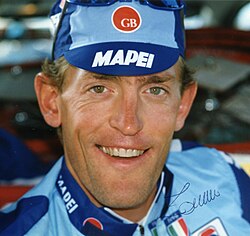 Stefano Zanini (born 23 January 1969 in Varese, Lombardy) is an Italian former professional road racing cyclist, the leadout man for Liquigas-Bianchi in 2006, after riding for Mapei, Saeco Macchine per Caffè, and Quick-Step.

His name was on the list of doping tests published by the French Senate on 24 July 2013 that were collected during the 1998 Tour de France and found suspicious for EPO when retested in 2004.