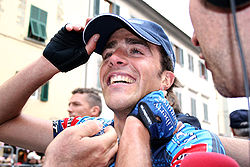 Koldo Gil Pérez (born 16 January 1978 in Burlata, Navarra) is a former Spanish professional road racing cyclist who last rode for the UCI Continental team Liberty Seguros Continental. His career highlights include winning a stage of the Giro d'Italia and leading the overall classification at the Tour de Suisse.

At the 2006 Tour de Suisse, Gil took stage 6 and held the leader's yellow jersey until the final stage when he was overtaken by 2004 winner Jan Ullrich in the final stage's individual time trial. He finished a disappointing second.

After Gil was unable to find a team for the 2009 season, he announced his retirement.