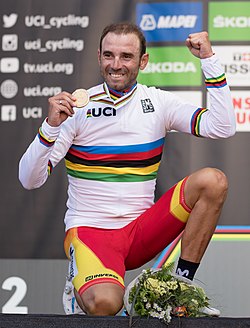 Overall, Valverde has 133 professional wins. Prior to his Worlds win, he already held the record for most medals won at World Championships – he twice collected the silver medal in the World Championships, in 2003 and 2005, as well as the bronze four times in 2006, 2012, 2013 and 2014. As of 2022, Valverde has entered thirty-one grand tours, finished twenty-six of them and placed in the Top 10 of a Grand Tour on twenty occasions. He also shares the record for most wins in the Points classification in the Vuelta a España (four times) with Sean Kelly and Laurent Jalabert.

Valverde is rare in combining different specialties in road bicycle racing, being a strong climbing specialist, sprinter and a good time-trialist. The online database Cycling Ranking ranks him as the 3rd most successful cyclist of all time.