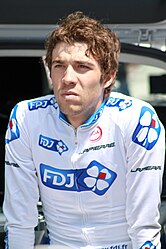 Thibaut Pinot (born 29 May 1990) is a French professional road bicycle racer, who rides for UCI WorldTeam Groupama–FDJ. Once considered one of the most promising talents in French cycling, he finished third overall in the 2014 Tour de France and first in the young rider classification. He has won stages in all three Grand Tours, with 3 in the Tour de France, 1 in the Giro d'Italia and 2 in the Vuelta a España. Pinot has also won the Giro di Lombardia in 2018 and finished 3rd in the race in 2015.