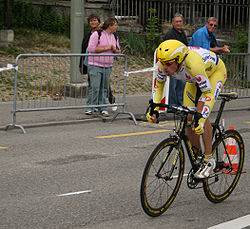 David Cañada Gracia (11 March 1975 – 28 May 2016) was a Spanish professional road racing cyclist. His win at the 2006 Volta a Catalunya is his best career accomplishment. In the 2005 Tour de France, he was in a break-away on stage 2 (the first open road stage); he attacked on the climb near the finish but was overhauled by Bouygues Télécom's Thomas Voeckler. Cañada was unable to compete in the 2009 season, due to treatment for skin cancer which had been detected in 2007, and retired early in the 2010 season, having been unable to find a team. He died unexpectedly at the age of 41 after a fall during a cyclosportive.