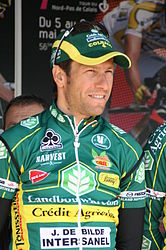 Geert Verheyen (Dutch pronunciation: [ˈɣeːrt fərˈɦɛiə(n)]; born 10 March 1973) is a former Belgian professional road racing cyclist who competed as a professional between 1994 and 2011. He was born in Diest, and is the cousin of cyclist David Verheyen.

He turned professional in 1994, racing for Vlaanderen 2002-Eddy Merckx. In 1998 he went on to race for the UCI Professional Continental team, Lotto, and later Rabobank, Marlux, Chocolade Jacques and Colnago. He competed in the 1998 Tour de France and the 2006 Volta a Catalunya.