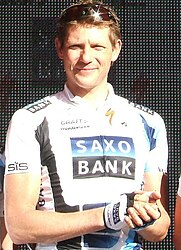 Frank Høj (born 4 January 1973) is a retired Danish professional road bicycle racer. Høj started as a stagiaire for the Zetelhallen–Vosschemie team in 1994, and became professional in 1995 for Collstrop–Lystex. His first win as a professional came the year after. In a live interview with Danish media station TV2 during the coverage of Tour de France 2015, Høj admitted to have used EPO in the early periods of his career, namely 1995-1998. He also competed at the 2000 Summer Olympics and the 2004 Summer Olympics.