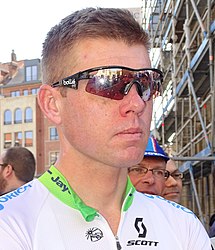 Brett Lancaster (born 15 November 1979) is an Australian former professional racing cyclist, who rode professionally between 2003 and 2016. Born in Shepparton, Victoria, Lancaster started cycle racing at the age of 14 in 1993. He spent four years riding for Ceramiche Panaria–Fiordo before moving to Team Milram in July 2006. In 2009 and 2010 he rode for Cervélo TestTeam, and rode for Garmin–Cervélo in 2011.

His greatest successes as a road cyclist were winning the prologue of the Giro d'Italia, and thus wearing the race general classification leader's pink jersey. He set a time of 1' 20" for the 1.15-kilometre (0.71-mile) race against the clock, the shortest prologue in the 88-year history of the event. Brett Lancaster is the first member of the Italian registered team, Ceramica Panaria–Navigare, to ever claim the pink jersey.

He won a gold medal at the 2004 Summer Olympics in Athens as a member of the team pursuit (with Graeme Brown, Bradley McGee, and Luke Roberts) in world record-breaking time of 3:58.233.

He was awarded the Order of Australia Medal (OAM) in the 2005 Australia Day Honours List. He was an Australian Institute of Sport scholarship holder.

Lancaster retired from cycling after the 2015 season, and moved to become a directeur sportif for Team Sky in 2016.