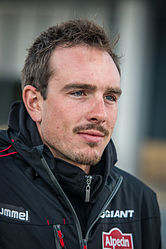 John Degenkolb (born 7 January 1989) is a German professional road bicycle racer, who currently rides for UCI WorldTeam Team DSM. His biggest wins to date are the 2015 Milan–San Remo and the 2015 Paris–Roubaix, two of cycling's five monuments. He is a winner of stages in all three Grand Tours, with ten stages and the points classification at the Vuelta a España, one stage of the Giro d'Italia, and one stage in the Tour de France.

In 2010 he won his first stage race, the Thüringen Rundfahrt der U23, and finished second in the under 23 race at the UCI Road World Championships. Degenkolb also took victory in the 2014 Gent–Wevelgem, the 2013 Vattenfall Cyclassics and was the overall winner of the 2012 UCI Europe Tour.