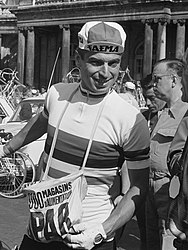 Henri "Rik" Van Looy (born 20 December 1933 in Grobbendonk) is a Belgian former professional cyclist of the post-war period, nicknamed the King of the Classics or Emperor of Herentals (after the small Belgian city where he lived). He was twice world professional road race champion, and was the first cyclist to win all five 'Monuments': the most prestigious one-day classics – a feat since achieved by just two others (both also Belgians: Roger De Vlaeminck and Eddy Merckx). With 379 road victories he's second to Merckx only. He is ninth on the all-time list of Grand Tour stage winners with thirty-seven victories.