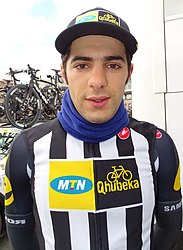 He began his professional career with the African MTN–Qhubeka team in 2013. His first professional win came in 2014 at the 2.1-ranked Tour d'Azerbaïdjan. The following year, he won his second professional victory at the summit finish of Fraser's Hill in the 2015 Tour de Langkawi. He was named in the start list for the 2015 Vuelta a España.