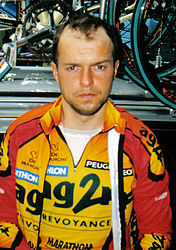 He spent the majority of his career riding under the management of Vincent Lavenu, initially joining Lavenu's Chazal–Vanille et Mûre team as a stagiaire and staying with the squad in its various incarnations for 12 years, taking a total of 124 race wins for the team. Kirsipuu initially retired at the end of the 2006, but participated in the 2007 Estonian championship, becoming time trial champion for the sixth time. In 2008 he was the manager of Latvian UCI Continental cycling team Rietumu Banka–Riga. In 2009 he joined LeTua Cycling Team. During his career, Kirsipuu got 115 professional wins and another 62 wins from criteriums and other non-professional races. He retired again in 2012, and became a sporting director with the Astana team.

At his peak he was one of Estonia's top athletes and the first Estonian rider to win a stage in the Tour de France. He dropped out of the Tour de France 12 times, which is the record. In spite of this, he won multiple stages and wore the yellow jersey for six days in 1999. This made him the only rider from Estonia to lead any of the three Grand Tours until Rein Taaramäe led the Vuelta for two days in 2021.