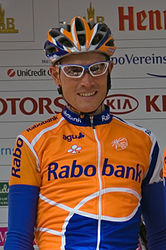 Grischa Niermann (born 3 November 1975 in Hannover) is a German former professional road bicycle racer, who competed as a professional between 1999 and 2012. He started his career in 1997 with the Die Continentale team, where he won the Hessen-Rundfahrt in 1998. He moved to Rabobank in 1999, winning the Regio-Tour that year. His only victory after that with the Dutch squad was the Niedersachsen-Rundfahrt in 2001. Following his retirement after the 2012 Vuelta a España, he became part of the coaching staff at Rabobank Development Team.

He has confessed to doping with EPO during his career.