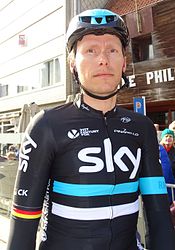 Christian Knees (born 5 March 1981) is a German former professional road racing cyclist, who rode professionally between 2004 and 2020, for the Wiesenhof, Team Milram and Ineos Grenadiers teams. He won the German National Road Race Championship in 2010. In 2011 he was originally going to join the Australian team known as Pegasus but left after they failed to secure a UCI Professional Continental license. He ultimately joined Team Sky as a domestique. He remained with the team as a rider until announcing his retirement from the sport in December 2020, moving into a role within the team's racing and performance areas.