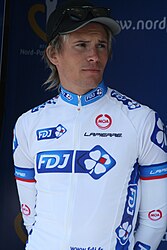 Yoann Offredo (born 12 November 1986) is a French road bicycle racer, who currently rides for UCI ProTeam Circus–Wanty Gobert. His only professional victory to date came, at the 2009 Tour de Picardie where he won stage 4.

He is best known for his efforts in the spring classics where he has finished 14th in the 2017 Tour of Flanders and the 2017 Paris–Roubaix. His best result in a monument came at the 2011 Milan–San Remo where he finished 7th after trying a late attack. He has competed in the Tour de France on three occasions, in 2017, 2018, and 2019, where he was often seen in the breakaway. Offredo is a user of the popular fitness site Strava, where he posts regular rides from his training and races.