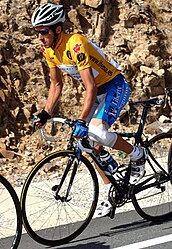 Roberto Heras Hernández (born 1 February 1974) is a Spanish former professional road bicycle racer who won the Vuelta a España a record four times. Between 1997 and 2005 he finished in the top 5 of the Vuelta every year except 1998 when he finished 6th. He won a record-tying three times, and then broke the record with a fourth win in 2005, but he was eventually disqualified after being accused of taking EPO. Heras chose to fight the accusations and this resulted in a lengthy court case and appeal process.

In June 2011, Heras successfully appealed the disqualification in the civil court of Castilla y León, and this decision was upheld in the Spanish supreme court in December 2012. The Spanish cycling federation subsequently reinstated Heras as 2005 Vuelta champion.