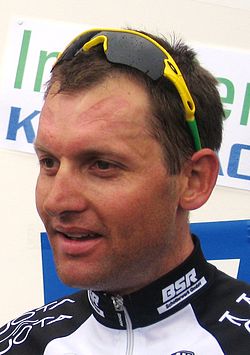 Born in Adelaide, South Australia, he resides both in Adelaide and in Cologne, Germany. Coming from a cycle racing family, he started competitive cycling at the age of 13, and turned professional in 2002. He was an Australian Institute of Sport scholarship holder. and a member of the Comnet Senges team (2002–2004), and of Team CSC from 2005 to 2007. As a team and individual pursuit specialist, holding an Olympic gold medal and World record with the Australian Pursuit team at the 2004 Summer Olympics, he contributes particularly to the success of his team in time trial events.

At the Olympic level, Luke Roberts has competed as part of the Australian cycling team at the 2000 Summer Olympics in Sydney and the 2004 Summer Olympics in Athens. In 2000 he came 9th in the Individual Pursuit at the Olympic Games. He improved his performance 4 years later in Athens, coming 5th in the Individual Pursuit. As part of the Australian pursuit team with Graeme Brown, Brett Lancaster, Bradley McGee, (Peter Dawson and Stephen Wooldridge were also part of the team), Roberts won gold and set a new world record for the 4000m Team Pursuit of 3mins 56.610secs, breaking their previous world record set in Stuttgart in 2003.

At the 1998 Commonwealth Games, Roberts achieved a gold medal for the Teams Pursuit, a silver medal in the Individual Pursuit, and came 8th in the Points race. Four year later at the 2002 Commonwealth Games in Manchester, Roberts won gold in the Teams Pursuit and 4th in the Individual Pursuit. His 2010 road racing team, Team Milram, folded at the end of that season, and he signed to ride for a proposed Australian team known as Pegasus: this team, however, failed to obtain a UCI license. After riding with UniSA in the 2011 Tour Down Under, Roberts signed with Saxo Bank–SunGard, a continuation of the squad he was with from 2005–2007, for the remainder of the season.