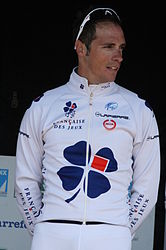 Sébastien Chavanel (born 21 March 1981 in Châtellerault) is a retired French professional road bicycle racer who last rode for UCI ProTeam FDJ. He is a younger brother, by just under 2 years, to fellow professional cyclist Sylvain Chavanel.

After three seasons with Team Europcar, Chavanel returned to FDJ.fr for the 2014 season. At the 2015 Tour of Flanders, Chavanel sustained right thigh hematoma as a neutral service car rammed his team car which was stopped behind him to change his bike's wheel.

By finishing in last place in the 2015 Tour de France, he was that year's lanterne rouge rider.