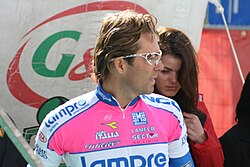 In 2003, Mori was involved in a doping incident, when, during the Tirreno Adriatico, he had to give a urine test, and a hidden can of urine was found. Mori and his team leader Gabriele di Francesco were sent home. His urine sample came back negative, but the Italian Olympic Committee continued the investigation into possible fraud.