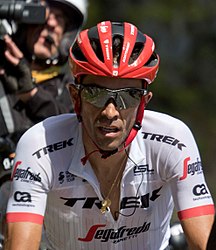 Alberto Contador Velasco (Spanish pronunciation: [alˈβeɾto kontaˈðoɾ βeˈlasko]; born 6 December 1982) is a Spanish former professional cyclist. He is one of the most successful riders of his era, winning the Tour de France twice (2007, 2009), the Giro d'Italia twice (2008, 2015), and the Vuelta a España three times (2008, 2012, 2014). He is one of only seven riders to have won all three Grand Tours of cycling, and one of only two riders to have won all three more than once. He has also won the Vélo d'Or a record 4 times.

He was regarded as the natural successor of Lance Armstrong and won the 2007 Tour de France with the Discovery Channel team. During his time at the Astana team, he won the 2008 Giro d'Italia, the 2008 Vuelta a España and the 2009 Tour de France. Between 2007 and 2011 he won six consecutive Grand Tours that he entered. This included winning the 2010 Tour de France with Astana, although it later emerged that he had tested positive for clenbuterol during the race. After a long battle in court, he was suspended by the Court of Arbitration for Sport and stripped of his 2010 Tour and 2011 Giro wins.

Contador was known as an attacking rider who excelled as a climber, and on his best days was also an excellent time-trialist. He was also known for being able to turn races around to his favour, most notably during the Fuente Dé stage at the 2012 Vuelta a España. Following his return from suspension, he won the Vuelta twice and the Giro once more. On the penultimate day of his career, he won a stage victory at the mountaintop finish of the Alto de l'Angliru.