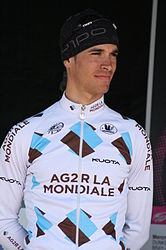 Lloyd Mondory (born 26 April 1982) is a French restaurateur and former professional road bicycle racer, who rode professionally between 2004 and 2015 for the AG2R La Mondiale team before he was suspended for four years for the use of erythropoietin (EPO). The biggest results of his career included victory in the 2008 Grand Prix of Aargau Canton, stage wins in the Étoile de Bessèges, the Vuelta a Burgos and the Paris–Corrèze and second place in a stage of the 2008 Vuelta a España.

In March 2015, it was announced that Mondory had tested positive for erythropoietin (EPO) in an out-of-competition test taken on 17 February. On 30 October 2015, the UCI announced that Mondory was suspended until 9 March 2019. Mondory did not return to cycling after his ban finished, electing to focus on his restaurant Oncle Scott's in Carentan, which opened in 2016.