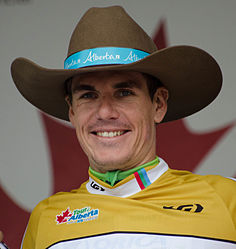 Daryl Impey (born 6 December 1984) is a South African professional road cyclist, who currently rides for UCI WorldTeam Israel–Premier Tech. Impey is an all-rounder; he generally comes to the fore on tough uphill sprints.

Impey is a two-time winner of the Tour Down Under, and the only rider to have won the race in consecutive years, winning in 2018, and 2019. He has won the South African National Road Race Championships twice, and is a nine-time winner of the South African National Time Trial Championships, including eight consecutive titles between 2013 and 2020. In 2013, Impey became the first South African rider to wear the yellow jersey at the Tour de France, doing so for two days; six years later, he won his first individual stage at the race, winning the ninth stage in Brioude.