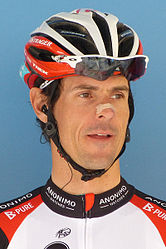 Andreas Klöden (born 22 June 1975) is a German former professional road bicycle racer, who competed as a professional between 1998 and 2013. His major achievements include a bronze medal at the 2000 Olympic Games and finishing second in the general classification at the 2004 and 2006 Tour de France. Klöden was a tall, lightly built racer with enough strength to place high in the overall classifications of the Grand Tours, but his performances were affected by injuries.