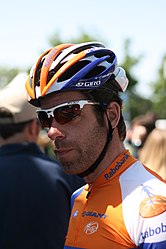 Born in Haaksbergen, Tankink started his career as a mountain biker, but in 1999 he became a road rider. In 2000 he became Dutch champion of the espoirs which resulted in a professional contract for 2001 at Domo–Farm Frites–Latexco. He stayed with this team for two years until he and a few others from this team went over to Quick-Step–Davitamon. Tankink usually acted as a helper in this team, hardly ever racing for his own success; but he was so much appreciated that the team allowed him to participate in the 2005 Tour de France which he finished in good form. After the Tour he played an important part in the victory of Filippo Pozzato at the 2005 HEW Cyclassics in Hamburg and during the 2005 Deutschland Tour he won the first stage from Attenburg to Plauen. Tankink also won several criteriums after the Tour de France.

Tankink joined Rabobank in 2008. He remained with the team until his retirement in 2018.