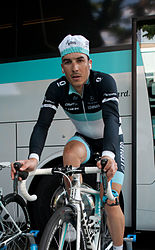 Bruno Manuel Pires Silva (born 15 May 1981) is a Portuguese former professional road bicycle racer, who competed professionally between 2002 and 2016.

Born in Redondo, Portugal, Pires began his professional career at the ASC-Vila do Conde team and was part of Milaneza–Maia and Barbot–Siper, before joining his first foreign team, Leopard Trek, in 2011. He then competed for four years with Tinkoff–Saxo, and his final season in 2016 was with Team Roth.