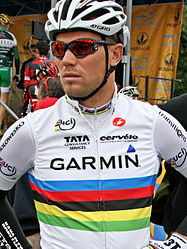 Thor Hushovd (born 18 January 1978) is a Norwegian former professional road bicycle racer. He is known for sprinting and time trialing; Hushovd is a three-time Norwegian national road race champion (2004, 2010, 2013), and was the winner of the 2010 World Road Race Championships. He was the first Norwegian to lead the Tour de France, and first Scandinavian to win the road race in cycling world road championship. He is also the Scandinavian with the most stage wins in Grand Tours. He is widely considered the greatest Norwegian cyclist of all time. He retired in September 2014.