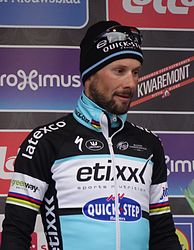 Tom Boonen (Dutch pronunciation: [ˈtɔm ˈboːnə(n)]; born 15 October 1980) is a Belgian former road bicycle racer, who competed as a professional between 2002 and 2017 for the U.S. Postal Service and Quick-Step Floors teams and a professional racing driver who currently competes in Belcar, having previously competed in the NASCAR Whelen Euro Series. Boonen won the 2005 UCI World Road Race Championships, and was a single-day road specialist with a strong finishing sprint. He won the cycling monuments Paris–Roubaix 4 times and the Tour of Flanders 3 times, among many other prestigious victories, such as prevailing 5 times in the E3 Harelbeke, winning 6 stages of the Tour de France and winning the Overall title of the Tour of Qatar 4 times.