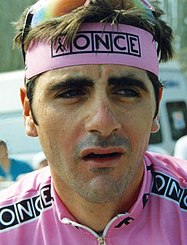 Affectionately known as "Jaja" (slang for a glass of wine; when he continued drinking wine as a professional, the nickname stuck because of the similarity to his name), he won many one-day and stage races and was ranked number 1 in the world in 1995, 1996, 1997 and 1999.

Although he never won the Tour de France, where he suffered altitude sickness, he won the Vuelta a España in 1995; as well as the leader's jersey, he won the sprinter's jersey and climber's jersey in the same race — only the third rider to have done this in a Grand Tour. With Alessandro Petacchi, Eddy Merckx, Djamolidine Abdoujaparov and Mark Cavendish, he is one of only five riders to win the points classification in all three grand tours.