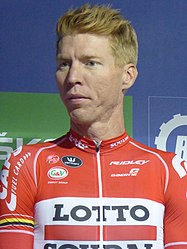 Marcel Sieberg (born 30 April 1982 in Castrop-Rauxel, North Rhine-Westphalia) is a German road racing cyclist, who currently rides for UCI WorldTeam Bahrain–Merida. He turned professional in 2005. For the majority of his career, he was one of André Greipel's lead-out men, having been teammates at both Team HTC–Columbia (2008–2010) and then later Lotto–Soudal (2011–2018). However, in August 2018 it emerged that the pair would go their separate ways for 2019, with Sieberg signing a one-year deal with Bahrain–Merida, taking on a role as a lead-out man for another German sprinter, Phil Bauhaus.