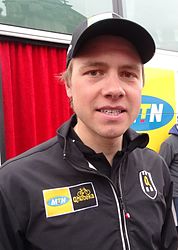 Edvald Boasson Hagen (born 17 May 1987) is a Norwegian professional road racing cyclist, who currently rides for UCI WorldTeam Team Qhubeka Assos. He was ranked as no. 3 in the world by UCI as of 31 August 2009, when he was 22 years old. He is known as an all-rounder, having won the Norwegian National Road Race Championships in 2012, 2015 and 2016. He is also a ten-time winner of the Norwegian National Time Trial Championships.

For the 2021 season, Boasson Hagen will join the Total Direct Énergie team.