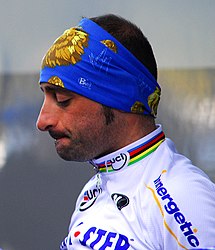 Paolo Bettini (born 1 April 1974 in Cecina, Livorno, Tuscany) is an Italian former champion road racing cyclist, and the former coach of the Italian national cycling team. Considered the best classics specialist of his generation, and probably one of the strongest of all times, he won gold medals in the 2004 Athens Olympics road race and in the 2006 and 2007 World Road Race Championships. He is nicknamed Il Grillo ("the cricket") for his repeated sudden attacks and his sprinting style.