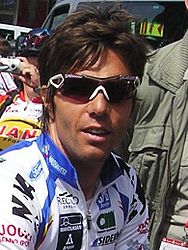 Danilo Hondo (born 4 January 1974) is a German former professional road bicycle racer. He won the German National Road Race in 2002. He competed in the men's team pursuit at the 1996 Summer Olympics.

He was banned from professional cycling and then later won his appeal to return to the sport. From January 2015 to May 2019, Hondo worked as a coach for the Swiss cycling federation, first for the under-23 squad and then with the elite. He owns a bike shop on the island of Majorca.

Hondo was born in Guben, Brandenburg.